October 21, 2016 By Meena Krishnamurthy in Uncategorized 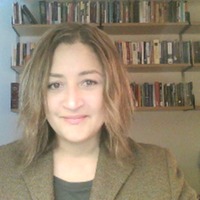 Tina Fernandes Botts is Assistant Professor of Philosophy at California State University, Fresno. Her primary areas of specialization are philosophy of law and philosophy of race. She has a Ph.D. in philosophy from the University of Memphis, a law degree from Rutgers University Law School, Camden, and a bachelor’s degree in philosophy from the University of Maryland, College Park.  Before moving to Fresno State, she had a postdoctoral fellowship at Oberlin College, and a fellowship in law and philosophy at the University of Michigan, Ann Arbor. Her scholarship centers on the reexamination of laws and other ethical and socio-political paradigms from the vantage point of the marginalized and oppressed. She is the editor of Philosophy and the Mixed Race Experience, an academic exploration of the impact of mixed race identity on philosophical workproduct, published by Lexington Books in 2016. In addition, she is the author of The Concept of Race, Aristotelian Proportional Equality, and the Equal Protection Clause, forthcoming from Lexington Books, which examines how changing conceptions of race and equality have affected Supreme Court decisions interpreting the Equal Protection Clause of the 14th Amendment. She is also the co-author, with Rosemarie Tong, of the upcoming fifth edition of Feminist Thought, published by Westview, as well as a practicing attorney who specializes in employment law.

My relationship with philosophy is an intimate one. I became a philosopher because I had no choice. I was born with a disposition that questioned everything around me, and with a desire to discover what I called in my youth “the meaning of life.” I tried other avenues for answering these questions, but philosophy kept calling. For me, philosophy was the only discipline where I was encouraged to constantly step outside the box, the only discipline where I felt free to let my mind run free. I am most comfortable around philosophers and the philosophically-minded, and I feel very fortunate to be able to make a living thinking about and writing about philosophy, and, of course, talking philosophy. As a young woman, my dream was to make a living in this way, but I was told on numerous occasions to “keep my day job,” since the jobs in philosophy were so few and far between. This discouraging advice was compounded by the fact that when I started on my journey to become a professional philosopher, one could (figuratively) count professional philosophers of color on one hand; and the situation for women philosophers was almost as dismal. Early philosophers of color and women philosophers have done so much to create a space for me (and others like me) in the discipline, and I am very grateful for all of their good work and tireless defiance of the institutional resistance to their presence that they have routinely encountered during their professional lives. I am proud to be a part of new efforts to build upon the work previously done to diversify the discipline, both demographically and in terms of content. Our discipline faces many challenges, including a large dose of elitism that often operates to alienate curious and capable students who could contribute so much to answering the perennial questions of philosophy. By my presence and persistence in staying in the discipline, despite significant institutional challenges along the way, I hope to contribute to making such students feel welcome, and to do my part to improve the discipline by working with others to proactively stretch philosophy’s disciplinary and demographic boundaries.

My work so far has been focused on philosophy of law, philosophy of race and the intersections between these two. My primary focus has been using legal hermeneutical tools to reinterpret constitutional laws that have proved counterproductive for people of color and other marginalized, oppressed, and subjugated groups.[1] One of my concerns has been the way antidiscrimination law neglects multiracial people. Multiracial people currently have no protection under U.S. laws from racial discrimination, despite a long history of such discrimination in the U.S. legal system and in American society. The surface reason for this lack of protection is that antidiscrimination law requires a prospective plaintiff to first identify as a member of one, and only one, of five legally established racial groups: Asian, black, Latino/a, Native American, or white. The deeper reason, however, is that U.S. Courts no longer acknowledge that the purpose of antidiscrimination law is to provide redress for historically situated, systematized oppression.

My concern regarding the relationship between multiracial people and the law is part of a broader concern I have with the way in which American law processes the concept of race more broadly. In a book I am currently writing, The Concept of Race, Aristotle’s Proportional Equality, and the Equal Protection Protection Clause, I examine the way in which the concept of race has changed since the enactment of the 14th Amendment, and how this changed concept of race has affected interpretations of the Equal Protection Clause. In the book, I am also concerned with how changing concepts of equality have affected these interpretations. One of my key points is that the way the Supreme Court understands race is context-dependent, nonsensical and out of step with academic scholarship. Mistakenly operating as if race is based in biology, the Court now operates as if racial discrimination per se, instead of racial discrimination against historically marginalized racial groups, is unconstitutional. Similarly, the Court’s reasoning in cases of racial discrimination seems to betray a concept of equality that is problematically rooted in Aristotelian political theory, according to which equality is available for equals only and not for unequals. This concept of equality is known as “proportional equality” and is out of step with the American ethos, at least as the Framers articulated it.

My work in the new book is rooted in work I have done in the past about the nature of racialized identity in the United States.[2] In that work, I argued that the strong belief in biological race in the United States, combined with the belief in an indelible, biologically-based hierarchy of races, has created what Heidegger would call a “world” or what I would call a system of intelligibility in which, for all intents and purposes, race is determined by “blood.” In other words, historically, and into the present day, the belief that race is determined by biology has reinforced the presumption of the reality of human racial categories, and at the same time reinforced the system of indelible racial hierarchy in the United States that defines who belongs to which race. In order to authentically play the race game, then, the racial identity of one’s ancestors has to be consulted. And if at least one of them was black, one has met the minimum criterion of blackness. Conversely, without black ancestors, one has not met the minimum criterion. At the same time, “blood” is not sufficient for black racial identity. There must also be black phenomenological experiences.

To me, the disconnect between what race is (a sociohistorical phenomenon with a specific history that significantly affects access to social goods) and what it is understood to be (biological) by the Supreme Court (and much of American society) has dramatically negative consequences for the ability of the law to protect members of racialized minority groups. If race is biological, then racial discrimination per se is legally problematic, even discrimination against whites. If race is sociohistorical, then racial discrimination against racialized minority groups is legally problematic because it operates to reinforce the vestiges of slavery. The first approach buys into the myth that we currently live in a colorblind society. The second approach, by contrast, soberly addresses the reality that the racial subjugation of racialized minority groups is alive and well in America, and must be grappled with head on if we are to ever achieve the dream of racial equality in the United States.