November 28, 2014 By Meena Krishnamurthy in guest post, the profession 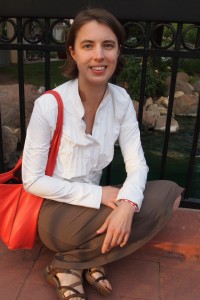 Carolyn Dicey Jennings is Half-British, Half-American and grew up in Texas, Louisiana, and Oklahoma. She went to the University of St Andrews in Scotland for her undergraduate degree in philosophy and Boston University for graduate degrees in philosophy (PhD) and psychology (MA). She worked with Takeo Watanabe’s Vision Lab as a Research Assistant while completing the MA at BU. She then worked with Bence Nanay as a postdoctoral researcher for a year on his Between Perception and Action project in Antwerp, Belgium before taking up an Assistant Professor position at the University of California, Merced. She works at the intersection of philosophy and cognitive science on the topic of attention, especially as it relates to perception, consciousness, action, and responsibility. She is researching issues of bias as part of her project on forms of responsibility outside of attention.

This is an important week for me. First, the situation in Ferguson and elsewhere has made the issue of bias a pressing one for me. Second, having my parents, all five of my sisters, and their partners (and dogs!) in Merced for Thanksgiving means that I am not getting much sleep. This has made me reflect a little on the attempt to fight harmful biases through self-control and vigilance—if this is our primary method of fighting our own biases, we had better have a strategy for avoiding ‘cognitive sleep’ on the job. But as much as we know about how to avoid sleeping in important meetings, we don’t know much about how to avoid slipping into harmful biases. All of us have oversights. We overlook those who are differently abled, more feminine, more foreign, shorter, less attractive, etc. We do not have the cognitive resources to account for all of these oversights on a regular basis. For those of us who make decisions under cognitive load, who may sometimes slip into something of a cognitive sleep, it might be useful to put aside time to “mine the gap.” That is, to actively explore the space that we may have overlooked for gems. Here are some methods that have worked for me. These methods do not require vigilance, which should be useful at Thanksgiving, or any time you are low on resources, sleep or otherwise.

This and the next method come from a post that I originally put up at New APPS exactly two years ago today (November 28th, 2012). I removed that and other posts in December 2012 when I considered leaving the blog (ultimately changing my mind). I am adding the text from that original post here:

“Over at FeministPhilosophers, a post was made on a new call to action: the journal Nature has called for its editors to insert a step into their method of choosing authors, wherein they must try to think of 5 female scientists who could be asked before finalizing their choice. As they put it:

“We believe that in commissioning articles or in thinking about who is doing interesting or relevant work, for all of the social factors already mentioned, and possibly for psychological reasons too, men most readily come to editorial minds. The September paper speculated about an unconscious assumption that women are less competent than men. A moment’s reflection about past and present female colleagues should lead most researchers to correct any such assumption. We therefore believe that there is a need for every editor to work through a conscious loop before proceeding with commissioning: to ask themselves, ‘Who are the five women I could ask?’”

I was inspired by this bold proposal to think of how it might be adapted for use by academic philosophers. If one wanted to follow this proposal, a helpful memory aid could be the lists collected at the APA Status for Women in Philosophy Website, which I recommend using. One limitation of the proposal is that it focuses on biases that harm female scientists, without accounting for the biases that harm, for instance, racial minorities. And so I unveil…”

“Conference organizers, book editors, and award committees, instead of relying on your own memories to come up with the relevant names, why not rely on The Extended Mind? In this case, I am using “The Extended Mind” to refer to the aggregate of publicly available information on working philosophers and their research. One could start by choosing a specific topic and then look at all those papers published (in the last ten years?) on that topic and choose names based on the best of these.

For example, if I wanted to put together an invite-only conference on the topic of attention, I could go to PhilPapers and look at papers by searching for “attention.” Here are the steps I took as an exercise, with optional elements italicized (which I wrote out so that anyone can copy and use them):

Step 6: Copy and Paste all text from the formatted text to column A of the Excel spreadsheet.

Step 10: Insert a column to the left of A and copy column B to A (paste “values only”) and then go to “Data” and “Remove Duplicates” for column A only.

Step 12: Sort (Custom Sort) Column A and B largest to smallest by column A values.

This results in the following list of philosophers with 2 or more publications on the topic together with the number of publications to the left (I am not on this list because my married and maiden names differ, which could be a problem with the method, but let’s forge ahead!):

Some of these names are not well known to me, which is why this method should be helpful to bring to mind authors that may otherwise suffer from bias. Of these authors there are 16 men and 4 women, which means that the method yielded, in this case, 20% female authors. This could be improved, but it is a good start.

This approach has the advantage of taking the emphasis off particular people and putting it onto their work. This should help with all kinds of bias, including name bias, racial bias, gender bias, etc.

This approach also has several problems. First, the best available database, PhilPapers, is not complete. Second, PhilPapers is gargantuan, which makes it less likely that the relevant parties will follow the steps I list above for search terms that yield very large numbers of names.”

In the original blog post, I then go on to discuss how one might develop graphics that would improve this method. Instead of discussing that proposal, I want to write about how an application of this method helped me in a recent project: a book review of Wayne Wu’s Attention.

In reading Wu’s book, I was struck by both the breadth of the literature he cites and the gaps in that literature. Coming from a graduate program with emphases in the history of philosophy and phenomenology, I found these absences most striking. I decided to run some tests to check for other absences. This is how I did it.

First, I went through the text and jotted down every name with multiple mentions. I created a list of these in Excel, tagging the names of women authors. Using a pdf copy of the book, I then used the “find” feature of Adobe Acrobat to determine the number of mentions per name. I found that 14% of the authors mentioned three or more times were women, but that 18% of these citations were of women authors (18%), roughly approximating the proportion of women in full-time positions in academic philosophy (16.6%).

Second, as with the Extended Mind Method, I did a PhilPapers search for “attention,” selecting the first 500 “most relevant” papers. I used the “Find” and “Mid” functions discussed above to isolate author names, and then used the “Consolidate” feature to sum up the number of publications per author. I selected all those authors with at least two such papers and then tagged the names of women authors. There were 16% women authors on this list of 45 authors. I compared this list to the list I created from Wu’s book, and found that roughly half–22 of the 45 authors–had not been mentioned in his book. I then explored the papers of these authors, finding some of them (8 of the 22) clearly relevant to the topics of the book. (I mentioned a few of these names in a footnote of the book review.)

What I noticed in this process is that Wu’s scholarship appears to be gender neutral: he cited women in approximately the same proportion that they publish on this topic. Nonetheless, as with any academic work, the scholarship has noteworthy gaps. Two of those gaps were apparent to me because of my educational background (historical philosophy and phenomenology), but these could have arisen for someone without such a background who used this procedure.

Each of us has our own such gaps. I hope that these and other methods will help to explore these gaps to expand the scope and quality of our research.