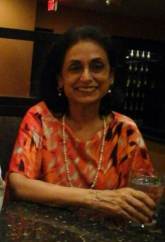 Neera K. Badhwar is Professor Emerita in the Department of Philosophy at the University of Oklahoma and affiliated with the Departments of Philosophy and Economics at George Mason University. Her work to date has been primarily in the areas of normative ethics and moral psychology, with occasional excursions into social-political philosophy. Her most recent major work is her book, Well-Being: Happiness in a Worthwhile Life (Oxford University Press, 2014), but she continues to write on virtue, happiness, and related issues.

Well-Being: Happiness in a Worthwhile Life: An Overview

Thanks, Meena, for being such an entrepreneur and starting this blog – and for inviting me to contribute to it! I’d like to give an overview of my recent book on well-being and virtue.

It took me a long time to get started on the book, because I had the feeling that “no one” would agree with my thesis that virtue is essential to well-being (flourishing, eudaimonia) – even worse, I wasn’t sure that I always agreed with it. I overcame the first hurdle by reminding myself that “no one” agrees with anyone anyway. This is somewhat exaggerated, of course, but something close to it is a common phenomenon in philosophy. (But why? I’m coming to the conclusion that we sometimes disagree only because we categorize things differently, and don’t realize that nothing very much hangs on the categorization.) The more difficult hurdle to overcome was within: I swung perilously between doubting my own thesis – and doubting its negation. I envied Buridan’s ass, who only had to choose between two bundles of hay and could have resolved the issue easily by tossing a coin – had it not been an ass. I finally managed to unite my divided inner being by progressively weakening my thesis to a shadow of its former version.

My thesis, briefly, is that if we understand well-being as the individual’s highest prudential good (HPG), it entails both happiness and objective worth, and that objective worth entails a life of the central moral virtues, such as justice, integrity, kindness, and the practical wisdom implicit in these (Ch. 1). Virtue and virtuous actions are, thus, partly constitutive of well-being; they are also, of course, a means to well-being. Aspiring to and achieving virtue and well-being is, therefore, both desirable and admirable. But the plausibility of my thesis depends on the plausibility of my neo-Aristotelian conceptions of well-being as the HPG and of virtue. Well-being as the HPG is a life that is most choice-worthy because it contains both fundamental human goods: happiness and objective worth. This conception of well-being is internally coherent and one that, I argue, many, if not most, people hold (Ch. 2). Indeed, even those philosophers who deny that objective worth is an essential constituent of well-being typically smuggle objective normative concerns into their theories (Ch. 3).

I further argue that someone who leads an objectively worthwhile life must be realistic, that is, she must have a grasp of important practical matters in a human life and her own life, and the ability to act on this grasp when circumstances permit. Such an understanding cannot be gained by imitation or rote, but must stem from the disposition to be autonomous and reality-oriented. To the extent that someone is realistic in this sense, she is also virtuous. Unfortunately, too many people believe that the psychologists, Taylor and Brown, have shown that mild delusions about our abilities and prospects are important for both happiness and virtue. I examine their work in detail, and conclude that their evidence is weak and their arguments fallacious. Although ignorance is sometimes better for us than the truth, being a realistic and, thus, virtuous person is better for us than being a deluded person.

My requirement of autonomy is sure to set off some alarms, given the long association of autonomy with high-level, self-conscious, articulable reasoning. But my conception of autonomy does not require such reasoning. An autonomous person, on my view, is someone who is disposed to think for herself about matters that are important to her life as a human being and individual. This requires that she be disposed to face facts and seek understanding of important matters, with others’ help if necessary. In other words, it requires that she have a stance of openness towards herself and others. Thus autonomy entails reality-orientation (actually, I think that autonomy and reality-orientation are two sides of the same coin – see Ch. 4 if interested!).

I defend the Aristotelian conception of virtue as an intellectual-emotional disposition to do the right thing for the right reason, in the right manner, at the right time, on both psychological and normative grounds, and show how it “fits” my conception of well-being both structurally and substantively (Ch. 6). Nevertheless, I argue that the demanding nature of Aristotelian virtue, in conjunction with our cognitive and emotional limitations, makes it psychologically impossible for human beings to be virtuous across the board and in all circumstances. Both social and cognitive psychology and everyday experience provide evidence of our limitations. Like theoretical wisdom, our practical wisdom tends to be compartmentalized (this is why my conception of virtue is neo-Aristotelian). This is one reason why complete well-being as the HPG is impossible. I proceed to consider and reject both the claim that villains can have the HPG, and the Stoic claim that virtue is sufficient for the HPG (Ch. 7).

I conclude by addressing common sources of skepticism about the thesis that well-being requires virtue (Ch. 8). One is the belief that it entails, contrary to the evidence, that the wicked must suffer and that the virtuous never suffer. But both conjuncts are based on a misunderstanding. All that my thesis claims is that, to the extent that people are vicious, they cannot have the HPG, and that to the extent that people have it, they must have virtue. Those whose vice is due to inherently unpleasant emotions, such as rage, jealousy, envy, or hatred, are condemned to suffer by the very nature of their vices. But those whose vice is due to indifference towards certain groups or individuals escape this fate. External sanctions are the only sanctions that can inflict pain on them. The costs of their wick­edness in pain and suffering—psychic, physical, and material—might be borne entirely by their victims. A further source of skepticism is the belief that my thesis contradicts what is only too obvious: that sometimes an act of injus­tice might be necessary for preserving the very things that make one’s life both happy and objectively worthwhile. However, my thesis does not contradict this. Sometimes a minor act of injustice is necessary in order to escape disaster, and depending on the details, such an act might be excusable, or even justified.

One thing I would like to explore further is the way one’s society or social organization can make acting virtuously costly. This is obvious in the case of dictatorships, where doing the right thing by violating some unjust edict is apt to be dangerous. But membership in certain organizations, especially those with great power over others and little moral or legal accountability, such as the police in our society, also makes virtue difficult. Every day we hear stories of unarmed, non-violent people being beaten up, broken, or even killed by policemen with impunity. In 2006, policewoman Carol Horne did the right thing by trying to stop a colleague from punching and choking a handcuffed civilian. She paid dearly for it. While the brutal colleague escaped all punishment, Horne lost her job as well as her entire pension. The fate of whistle blowers, especially in politics, is similar (think Edward Snowden). While these facts don’t refute my thesis that well-being entails virtue, and while both Horne and Snowden are glad they did the right thing, their examples do show that, in many sorts of situations, acting virtuously can harm us – even though failing to act virtuously can harm us even more.