May 30, 2015 By Meena Krishnamurthy in Uncategorized 4 Comments 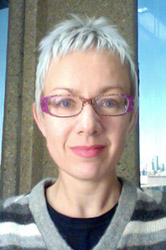 A.W. Eaton is an Associate Professor in the department of philosophy at the University of Illinois at Chicago. She received her Ph.D. from The University of Chicago in both philosophy and art history in 2003. She works on topics in feminism, aesthetics and philosophy of art, value theory, and Italian Renaissance painting, including: the epistemological and ontological status of aesthetic value, the relationship between ethical and artistic value, feminist critiques of pornography, representations of rape in the European artistic tradition, and artifact teleology (for more details and publications, see her homepage). Anne was a Laurence Rockefeller Fellow at Princeton’s Center for Human Values in 2005-6. She is currently the editor of the Aesthetics & Philosophy of Art section of Philosophy Compass.

It is an honor to contribute to this excellent blog. Meena, thank you for your hard work in keeping this going for us!

Before I tell you about my work, I want to say something about my field. I’m a feminist philosopher whose primary home is in aesthetics/philosophy of art (I’ll say just “aesthetics” for short). One of the things that you might not know about aesthetics is that we can boast of an unusually high (for philosophy, that is) percentage of women. It’s also a field where there are a lot (again, compared to other fields in philosophy) of highly respected senior women. For instance, the current president of the American Society of Aesthetics is Cynthia Freeland (U. Houston) and the next president will be Kathleen Higgins (UT Austin), and there have been several other women presidents in the past 10 years. Aesthetics has provided me with multiple women role models and lots of women friends, and our annual conference is one where I generally feel like my gender presentation is not a liability (at least compared with, say, the APA). I sometimes wonder if our relative woman-friendliness is part of the reason that aesthetics is not taken as seriously by philosophers from other fields. Who knows? What I do know is that while aesthetics is not perfect, it’s a relatively good place to be a woman compared with other parts of philosophy I’ve seen. (On both the bad and the good in aesthetics, see Sherri Irvin’s excellent blog post here.)

Philosophy-wise, aesthetics has a lot to offer feminism. One example is a topic I’ve recently been working on, namely taste. In particular, I’m interested in what I call taste in bodies, by which I mean, roughly, a person’s sense of what makes a person (herself or another) physically attractive or unattractive in some way.

Taste in bodies is a complex matter. For one thing, our taste in bodies takes as its object more than the body strictly speaking, and extends to: things that we do with our bodies, like kinds of bodily comportment; the way we care for and groom our bodies; and things that we put on our bodies, like clothing, makeup, jewelry and other accouterments. Further, physical attractiveness and unattractiveness have many modalities, of which “beauty” and “ugliness” are just two. Others include: handsomeness, cuteness, sexiness, chic-ness, cleanliness, tidy-ness, fragrance (pleasant smelling), on the one hand, and ugliness, dorkiness, dumpiness, repulsiveness, dowdiness, dirtiness, unkemptness, stinky-ness, on the other hand.

As you can probably tell from this (admittedly incomplete) list, taste is usually evaluative to some degree. By evaluative I do not mean that taste need involve explicit appraisals of the worth of the object toward which it is directed; rather, I mean that the phenomenology of taste is to present its object as valuable and so worthy of experiencing, having, or preserving (or as disvaluable and so to be avoided or discarded). This is one way that taste can be so important for feminism and other fields centered on oppressions that are at least in part bodily, such as ableism, racism, fatism, and trans-negativity. Whether we are consciously aware of it or not, certain types of bodies, bodily features, manners of bodily comportment, and ways of decorating and accessorizing bodies are pervasively over-valued in our society; these strongly tend to be the bodies of relatively thin, able-bodied, cis-gendered persons racialized as white. On the other hand, bodies that do not fit this aesthetic paradigm – especially, but not exclusively, bodies that are trans*, fat, disabled, or belonging to persons racialized as Black – are chronically devalued and derogated.

My answer is that of course we should concentrate on these things. But we oughtn’t underestimate the role that perceived physical un-attractiveness can play in these things, or the extent to which perceived physical attractiveness and un-attractiveness have far-reaching moral, psychological, social, and economic ramifications. For instance, at one extreme of the spectrum of physical attractiveness, philosophers working in moral psychology have shown that judgments about bodily disgust have historically played and continue to play a pivotal role in demarcating and maintaining group boundaries by vilifying and dehumanizing a given out-group (women of all colors, Jews, Blacks, disabled persons, homosexuals, and trans* persons). And there is considerable evidence from social psychology that those perceived as merely unattractive or even just “plain” are not only less likely to be judged smart, interesting, and likeable than those deemed attractive; those perceived as unattractive are also more likely to receive unfavorable treatment in legal settings, less likely to be hired and promoted, earn on average lower salaries, and so on. All of this can have far-reaching, and sometimes quite severe, negative consequences for self-esteem and interpersonal relations; this is typically especially true for women. Finally, there is good evidence from social psychology not only that perceived physical attractiveness affects our unrelated assessments of ourselves and of others, but also that we strongly underestimate the extent to which this is so, making this kind of bias especially difficult to detect and dismantle.

In these and other ways, people’s taste in bodies does not merely reflect the dominant order (which is white, male, ablest, homo-negative and fat-negative and trans-negative); taste in bodies, I am arguing in my current work, is part of what promotes and maintains that order.

Now, contemporary feminist philosophy tends to eschew considerations of the role of taste in promoting and maintaining male supremacy (or whatever you prefer to call it). I think that part of this eschewal is due to a misunderstanding about taste, a misunderstanding that, for instance, Sally Haslanger expresses in her important essay ‘“But Mom, Crop-Tops Are Cute!” Social Knowledge, Social Structure, and Ideology Critique,’ when she worries that construing the claim “crop tops are cute” as a judgment of taste would not “make room for meaningful critique” (p. 73). But most any aesthetician will tell you that it is a mistake to assume that taste leaves no room for meaningful critique: contrary to the adage “De gustibus non disputandem est,” there is disputing about taste. For instance, we can ask whether our judgments of taste are properly directed at appropriate aesthetic properties. A different approach inquires into the morality (broadly construed) of our taste; for instance, we can critically ask whether our taste supports or undermines social justice.

Another reason for this eschewal of taste is feminism’s generally intellectualist tendency, by which I mean a tendency to conceive of sexism primarily in terms of peoples’ (misguided) beliefs about the two sexes (and, of course, the actions based on these beliefs).

While I of course do not disagree that false beliefs – both conscious and unconscious – play a significant role in sustaining the dominant order, I urge that we give more attention to the role of the affective life, and in particular more attention to taste, when thinking about various kinds of oppression. After all, on most any plausible account of human action, beliefs are not by themselves sufficient to motivate us to act.

On my view, finding crop tops to be cute, or high heels to be sexy, or fat to be unpleasant and maybe even disgusting, these are all a matter of what I’m calling taste in bodies. One feature of taste in bodies, as with all taste, is that it can be deeply norm discordant and unresponsive to rational guidance. (Just think, for example, about how effective you might be at arguing your way into finding a particular type of body or bodily feature to be attractive.) This is very important when considering taste’s role in sustaining various forms of oppression.

To see what I mean, let’s consider an example like high-heeled shoes. It is really and truly my deeply considered view that high-heeled shoes are bad for women in a variety of ways: e.g., whereas most men’s shoes are grounding, enabling, and relatively foot-friendly, high-heeled shoes are by contrast harmful to feet, legs, and back, and they are hobbling in the sense that they basically force us to take mincing steps and are difficult, if not impossible, to run in (and these effects are all more pronounced the higher the heel). To wear high-heels is to not only participate in, but also to promote, an aesthetic that diminutizes and sexualizes women. For these reasons, I think that we ought not wear heels, and one might give similar reasons against crop tops. (Just to be clear, I do not mean, of course, than anyone should be prohibited from wearing heels or crop tops, nor do I think that women and girls should be shamed or even criticized for wearing these things. But I do think that eliminating heels and sexually revealing clothing, which means eliminating the taste for these things, would be one important step toward achieving gender equality.)

But here’s the rub. While I am fully doxastically committed to this, I nevertheless own several pair of high-heeled shoes that I regularly wear. Why? I’m sure that you can guess: because I think that they make me look attractive and I care about looking attractive (more than I would like; which is yet another thing that I intellectually disavow on feminist grounds yet nevertheless perform and uphold in my daily life). Or, to put the point in a way that connects up with what I was saying earlier: because I have developed a taste for heels. And when it comes down to making decisions about what to wear, my taste often wins out over my well-considered convictions, and so I end up embodying and promoting something that I disavow. Even if you don’t agree with me about heels, I hope that you recognize the general phenomenon and can see why it’s important.

In all of these papers, I’m also especially interested to think not just about how taste perpetuates oppressions of various sorts, but also to think about how we can bend our tastes in bodies in the direction of social justice. How can we change taste for the better? Since I’ve probably already gone on too long, I’ll just say briefly that I’m developing an Aristotelian answer, namely habituation. Habituation involves repeated guided exposure to the thing in question, where the point of the guidance is to ensure that the trainee, as it were, comes to see the value (or disvalue, depending on which way the habituation is going) in the thing to which she is being habituated. (This, by the way, is supposed to be the difference between Aristotelian habituation and mere operant conditioning.) Through habituation, one comes to develop the standing disposition to have the right sorts of pleasurable or displeasurable evaluative feelings about an object, and to have these feelings with the proper intensity; in other words, to develop the right sorts of tastes. I think of most advertising as working on this model. Vivid pictures (moving or still) entice their audiences to have evaluative sentimental responses to the objects they depict (which are the objects being promoted), and this directed engagement inculcates in the audience a predisposition to have the same kinds of response to similar objects in the world.

So that’s what I’m working on. Thank you for reading! I’d love to hear your thoughts!