April 10, 2015 By Meena Krishnamurthy in Uncategorized 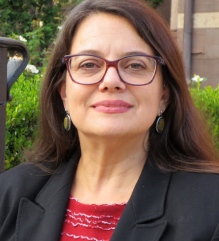 Teresa Blankmeyer Burke is assistant professor of philosophy at Gallaudet University, the world’s only liberal arts college for deaf and hard of hearing people. She completed her Ph.D. in 2011 at the University of New Mexico. Burke’s research for the most part resides in deaf philosophy, the space where philosophy intersects with Deaf studies. (The use of uppercase Deaf designates the cultural community of signed language users; lower case deaf designates audiological status). Topics she has published on include moral justification regarding the use of genetic technology to bear deaf children (specifically, the question of signing Deaf potential parents considering this option) and signed language interpreting ethics. Burke has interests in virtue ethics, and is using the professional virtues of signed language interpreters, such as (glossed in ASL) DEAF-HEART and ATTITUDE, as a testbed for philosophical accounts of the virtues. Another project uses the notion of deaf gain (contra hearing loss) to work through conceptions of intrinsic and instrumental value. Her newest endeavor explores questions related to deaf well-being; works in progress include papers on deaf liberty and full access to language as a good.

April 8 marked a significant anniversary in the education of the deaf — the founding of the Columbia Institution of Instruction for the Deaf and Dumb and the Blind one hundred and fifty-one years ago. This was the first institution of higher education to offer instruction in American Sign Language (ASL); from the very start it included a few courses situated within the domain of philosophical inquiry. Of course, this does not mark the first instance of philosophical discourse in signs, which is unknown, but examples of this occurring in the famed salons of eighteenth century Paris are documented by the deaf man Pierre DesLoges.

As a Deaf[1] philosopher who works at a university where the language of classroom philosophical discourse is ASL, I have been thinking about something I’ve been calling DEAF PHILOSOPHY[2] for a long time. There are two primary strands of inquiry in this project: the first involves questions about language and language modality of philosophy when it is done in a signed language; the second considers ways that one might approach philosophical questions through a Deaf lens. I will focus on the first strand in this essay.

I’ve been working on the construction of a personal philosophical lexicon in American Sign Language since I was a graduate student at the University of New Mexico, and my interpreters started peppering me with questions: what is modus ponens? Is there a name sign for Socrates? How do you want me to sign deductive?

The conventional way to handle specialized vocabulary in American Sign Language is to spell it out using the one-handed manual alphabet, so ‘coherentism’ becomes ‘C-O-H-E-R-E-N-T-I-S-M’, and ‘akrasia’ turns into A-K-R-A-S-I-A, this last being contingent on whether the interpreter has heard ‘akrasia‘ pronounced in that fashion before and knows how to spell it. But there is a huge disadvantage to fingerspelling technical philosophical discourse, which is that it amplifies the lag time for interpreted philosophical discourse.

How ought one to go about creating a philosophical lexicon in a signed language in the first place? This is not just a question of linguistics, but ethics. Historically, educators of the deaf have not always treated signed languages (and those who use them) with respect. In addition to the minority language suppression that can occur in educational settings with a program of dominant language assimilation, what sets signed languages apart is that these were not regarded as full natural languages. As a consequence, hearing educators of the deaf developed signed systems that borrowed words from natural signed languages in hopes that this would make it easier for deaf children to learn the dominant spoken language of the local community.

What did this look like? As an analogy, imagine teaching a Navajo speaker English using the following method. First, alter Navajo words in ways that violate the linguistic conventions of that language, but that make them sound somewhat more English-like. Next, take those neologisms and arrange them in English word order. Finally, forbid people to use the natural language of Navajo because it will interfere with the acquisition of English through this system.

Because roughly ninety percent of deaf children do not learn signed language at home from their parents, one effect of these signed systems developed by educators of the deaf was that many children never acquired full access to a natural language. Many people in the signing deaf community today are not fluent in a signed language or a spoken language, having only developed broken English and broken ASL. This legacy of harm generated by the proliferation of signed systems in deaf education is the backdrop for anyone who wishes to create a lexicon in a signed language, and especially educators.

Generating philosophical signs in ASL requires knowledge of both ASL and philosophy. As an example, when considering how to sign the English neologism ‘alief’ in ASL, I thought it was important to not only develop a sign that was linguistically appropriate, but that captured the nod to ‘belief’ that is suggested in the English word. This is also helpful for pedagogical purposes, for both students and interpreters. So the sign I created for ‘alief’ looks very much like the ASL word BELIEF, adding a subtle change in handshape that creates a portmanteau of BELIEF and HABIT. As a purely incidental feature, the ASL word HABIT uses two hands in the shape of the manual alphabet letter ‘A’ — this reinforces the ‘A’ in the English word ‘alief’.[4]

One might wonder whether there is a significant difference between what I have just described above and the process used for developing new words for signed systems. I believe there is such a difference. In the case of signed systems, existing words for concepts are altered to satisfy the rules, constraints and objectives of the signed system, even if this means breaking the conventions of the natural language. In the example above, the ASL word for ‘alief’ is generated using existing ASL words, and the conventions of the language are respected, including handshape, orientation, movement, and placement in space.

Another way to add to the philosophical lexicon in ASL is through namesigns. A name sign is a unique sign that is used to designate a particular person. A person’s name can be fingerspelled using the manual alphabet, but namesigns are often used, especially when the person’s name is longer than 3-4 letters. There are conventions that govern a person’s name sign – these include permitted locations on the body, association with one’s family (if one’s family uses ASL), and sometimes identification of a particular characteristic.

I believe that the development of a philosophical lexicon in ASL must acknowledge this history and have buy-in from the signing Deaf community, in addition to respecting the linguistic conventions of ASL if it is to have any chance of succeeding.

To this end, I’m very excited to announce a grant project to develop a web resource for a philosophical lexicon in ASL sponsored by the Rochester Institute of Technology. The team includes signed language interpreters, ASL Masters, and hearing philosophers and a Deaf philosopher working together to develop and refine the lexicon. The aim of this project is to provide a resource for deaf philosophy students who are taking introductory level philosophy courses, and for the interpreters who are interpreting these courses for the students. The focus in this first phase is to build the lexicon for the following courses: Introduction to Ethics, Reasoning and Critical Thinking, and Introduction to Philosophy.

[1] The upper case ‘Deaf’ is used in Deaf Studies convention to indicate a person who is a member of a signed language sociolinguistic community. The lower case ‘deaf’ marks audiological status.

[2] Upper case letters are used to denote American Sign Language gloss. I haven’t yet settled on a satisfactory English translation.

[3] The Gallaudet University Philosophy Department has identified just two signing deaf people who have received doctorates in philosophy; James E. Haynes was the first to do so at the University of Maryland in 1999.

[4] I am grateful to Tamar Gendler for our discussion of this topic.