April 27, 2015 By Meena Krishnamurthy in Uncategorized 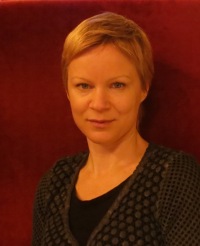 Susanna Schellenberg is an Associate Professor at Rutgers University. She has published articles on perceptual experience, evidence, capacities, Fregean sense, action, mental content, and imagination. Her work has been published in journals such as The Journal of Philosophy, Mind, Noûs, and Philosophy and Phenomenological Research. Before moving to Rutgers, she was at the Australian National University, where she was the first woman to be hired in a permanent position in the School of Philosophy at the ANU’s Research School of Social Sciences.

Perceptual Experience is Fundamentally a Matter of Employing Perceptual Capacities

A big thanks to Meena for initiating and running this excellent blog. And thanks also for inviting me to contribute a post.

Perceptual experience plays at least three different roles in our lives. It justifies our beliefs about our environment. It brings about conscious mental states. It converts informational input, such as light and sound waves, into representations of features that we attribute to the world. Corresponding to these three roles, there are at least three fundamental questions that have motivated the study of perceptual experience.

Mind-question: How does perceptual experience bring about conscious mental states in which our environment appears or seems a certain way to us (irrespective of the way our environment actually is)?

Information-question: How does a sensory system accomplish the feat of converting varying informational input into mental representations of invariant features that we attribute to the world?

The last decade has seen an explosion of work in philosophy of mind and cognitive science addressing the mind- and information-questions. While there has been fruitful interaction between work on perception in philosophy of mind and cognitive science, there has been much less attempt to integrate this work with issues in epistemology. Theories that are motivated by the mind- and information-questions have to a large extent been developed independently of concerns about how perception provides us with evidence and knowledge of our environment. For the same reason, theories of perceptual experience that are motivated by the epistemology-question have been developed largely independently of concerns about how perceptual experience brings about conscious mental states. To be sure, most accounts of perceptual justification rely heavily on the idea that perception yields sensory states, which justify beliefs. However, such accounts typically take as a given that such sensory states provide evidence and immediately proceed to addressing the question of what the relationship is between the evidence provided and relevant beliefs.

I argue that experience provides us with evidence in virtue of its metaphysical structure. More specifically, I argue that sensory states are yielded by employing perceptual capacities that function to single out particulars in our environment. So there is primacy of the employment of perceptual capacities in perception over their employment in hallucination and illusion. Due to this primacy, sensory states provide us with evidence. This view of evidence is externalist while avoiding the pitfalls of reliabilist accounts. Moreover, it provides for an evidential answer to how and why we are in a better epistemic position when we perceive than when we hallucinate (Mind 2013 and Philosophical Studies 2014, 2015). The more general project is to ground intentional states in the employment of mental capacities and to explain the epistemic force of the intentional states in virtue of properties of the capacities employed.

This view of the epistemic force of perceptual experience is grounded in a representationalist view of perceptual experience. I have defended a detailed account of the nature of perceptual content that advances a new way of understanding singular modes of presentations. I argue that experience is fundamentally both relational and representational (Philosophical Studies 2010, Noûs 2011). This view of content has interesting implications for the sensory character of experience. It provides for a way of understanding sensory character in terms of a mental activity, more specifically, in terms of employing perceptual capacities (Philosophy and Phenomenological Research 2011).  The idea is that in hallucination, we employ the very same perceptual capacities that in a subjectively indistinguishable perceptual experience are employed as a consequence of being related to external, mind-independent objects or property-instances. Employing perceptual capacities yields a mental state with content. This representational account of sensory character is an alternative to the orthodox approach on which sensory character is analyzed in terms of awareness relations to abstract entities, such as properties, sense-data, or other peculiar entities. By arguing that we employ the very same perceptual capacities in subjectively indistinguishable perceptions, hallucinations, and illusions, I provide a metaphysically substantive way of understanding the common factor between these experiences.